Recently I was surprised to find out that a process that I expected to to complete in about 8 hours was still running after 20. Everything appeared to be operating normally. The load on the server was what we expected, IO was minimal, and the external services it was using were responding with latencies that were normal.

After tracing one of the sub-processes we noticed that reads from /dev/urandom were not what we expected. It was taking 80-200ms to read 4k from this device. At first I thought that this was an issue with entropy but /dev/urandom is non-blocking so that probably wasn’t the issue.

The number of processes reading from /dev/urandom made me wonder if maybe there was a spinlock in the kernel in the read code. After looking at the code I found one. You can see the spinlock here in the Linux kernel source code. The author mentions the potential for contention in a thread on the mailing list from December 2004.

Fast forward 10 years and contention on this device is a real issue. Our application uses curl from within PHP to fetch data from a cache. The application has to process 10s of millions of text objects and we don’t want to wait days for that processing to complete so we split the work of processing each object over N threads.

So why is this an issue? I wrote a python script to measure the read times from /dev/urandom as you increase the contention by adding more threads. Here is a plot with the results. 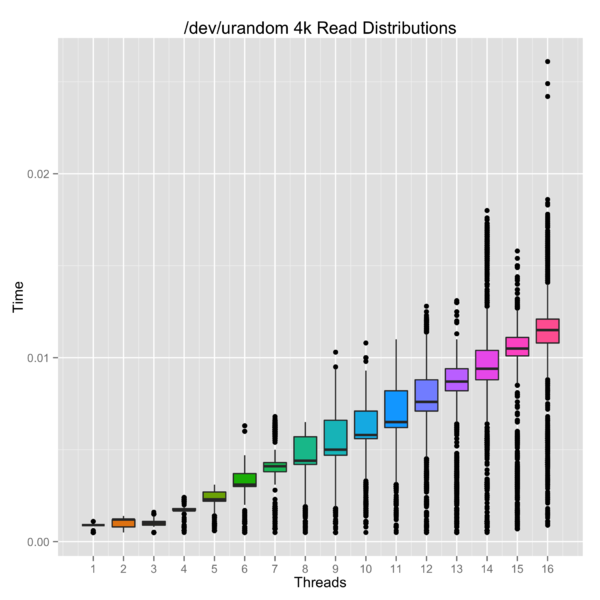 Running the same script with a user-land file is more or less linear out to 16 threads. A simple spinlock can have a big impact in the multi-core world of 2014!